Back To Life! A Personal Grief Guidebook 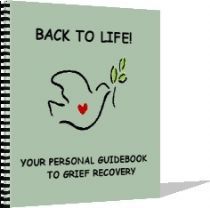 Historically, funerals were designed to serve the purposes of honoring the dead, supplying them with the means for existence in the next world and gaining favor with the gods. Funerals still honor the dead, but the main function served by modern funeral practices is to allow survivors to work through their own feelings concerning the deceased. However, the sense of loss, sadness, and other feelings associated with the death of a loved one do not end with the funeral. A period of bereavement and mourning by the survivors, and the spouse of the deceased in particular, may continue for months and even years after the funeral.

Modern Funerals. Modern funerals are often preceded by some sort of wake, in which the groomed and often embalmed corpse is on display in a funeral home or private residence. Relatives of the deceased are informed by telephone or telegram of the time and place of the wake, and a notice is placed in the obituary columns of local newspapers. Depending on the prominence of the deceased, not only family members and friends, but also many others may come to the wake to view the corpse and pay their respects. The casket is usually open but may be closed at both the wake and the funeral service when the corpse has been disfigured by disease or accident. The psychological significance of the open casket in providing a "memory picture" of the deceased is debatable, but certain religious and cultural groups place great store in its importance.

The nature and location of the funeral service also vary with the cultural and religious background of the survivors. For example, Roman Catholics, who are more likely than Protestants to hold funerals in a church rather than in a funeral home, are more favorably disposed toward elaborate funerals (Khleif, 1976). In both the United States and other countries, secular funerals have become more commonplace (Norbeck, 1995). Another modern trend has been toward simpler funerals or memorial services characterized by an emotional toning down of the service and a deritualization of mourning.

Following the funeral service, and usually on the same day, the corpse is buried, or, if cremated, may be disposed of in other ways. In the tradition of "dust-to-dust,'' Orthodox Jews and Muslims generally adhere to in-ground burial, whereas Hindus and Buddhists stress cremation. Either burial in the ground or entombment, and, to an increasing extent, cremation, is acceptable to most Christian denominations.

In the United States, only about one-fifth of all corpses are cremated, but the practice is more popular in Canada and in Asian countries. Public concern over the cost of funerals and the marketing methods of the funeral industry has led to greater regulation of the industry in the United States and the increased popularity of memorial services and cremation. Greater openness and fewer cultural constraints with respect to death and dying have also contributed to the growing popularity of simpler, more economical, but still dignified and meaningful, funeral practices.

Bereavement. Bereavement, the loss of a loved one by death, is almost always followed by the mental state of sorrow and distress known as grief. The culturally prescribed pattern of behavior by which the grief caused by bereavement is expressed is referred to as mourning. The duration of mourning and the specific conduct of mourners, such as wearing black and restricting one's social activities, and flying flags at half mast, have varied with the historical period and culture. In today's Western culture, the duration of mourning is typically fairly short, and many older customs associated with it have been abandoned. Numerous practical matters concerned with the funeral, the deceased's estate, and new domestic and other duties of the spouse or other immediate family members must be taken care of. In addition, the survivors must contend with various psychological and social concerns associated with the death. In short, the survivors must find ways to let go of the deceased and get on with the business of living.

During and immediately after the funeral, there is typically an outpour ing of support for the survivors, but with time, the level of social contact and the emotional support associated with it diminish. Being alone to contemplate and express one's grief in private is not a bad thing if it does not last for a prolonged period of time and is not accompanied by bizarre behaviors. A period of quiet grief and contemplation is a healthier reaction to bereavement than denial or escapist pursuits such as immersing oneself into the social whirl.

Feelings of grief are not always expressed immediately after the loss of a loved one, but may be delayed for months or even years. On the other hand, so-called anticipatory grief may be expressed even before the death of a loved one. Typically, however, the grieving occurs after the death and consists of three phases (Gorer, 1965): initial, intermediate, and recovery. During the initial phase, which lasts from about 3-6 weeks, the bereaved person experiences shock and disbelief, and may feel cold, dazed, empty, numb, and confused. The initial phase is followed by an intermediate phase characterized by sorrow and loss punctuated by crying spells. In addition to deep sadness, it is fairly normal in the intermediate phase of grief to feel angry, anxious, and guilty. Anger may be expressed toward anyone whom the bereaved views as having contributed, either by commission or omission, to the death, or as having been unkind to the deceased while he or she was alive. Favorite targets of anger are medical personnel, family members, business associates of the deceased, and even oneself. When anger is expressed toward oneself for not having done more to prevent the death or in other ways serve the deceased, it often changes to guilt. Bereaved persons may also have feelings of hopelessness, depersonalization, disorientation, unreality, a loss of interest in things, and an inability to concentrate. They may cry, have difficulty sleeping, have little energy, and become dependent on sleeping medications, alcohol, and tranquilizers. They may have feelings of tightness in the throat, choking, shortness of breath, digestive upsets, and headaches. In an effort to find meaning in the death, the bereaved person may also continually engage in a mental review of his or her interactions with the deceased (Clayton, Halikes, & Maurice, 1971; Imara, 1995; Parkes, 1972).

The third phase of grief— recovery— normally begins approximately a year after the death, but, depending on how the person died and the be-reaved's relationship with him or her, it may take much longer and perhaps never occur completely. Thompson, Gallagher-Thompson, Futterman, Gilew-ski, and Peterson (1991) found that, on the average, the experience of grief lasted for at least two-and-a-half years following the death of a spouse. In particular, if the death was sudden or unanticipated, as in an accident, murder, or suicide and/or the deceased was quite young, the third phase of grief may be delayed indefinitely.

The process and progress of grieving are, of course, not the same for all people. At one extreme are those who remain calm and efficient throughout the wake, the funeral, and the postfuneral periods. They show few signs of grief and quickly adapt to the loss (Lieberman & Peskin, 1992). At the other extreme are those who experience intense emotional reactions that persist for years after the death. In a phenomenon referred to as the anniversary reaction, the bereaved person reexperiences feelings of grief on the anniversary of the death.

In general, emotional reactions to the loss of a spouse are less intense and the period of grief is shorter in older than in younger people (Ball, 1977). Grief also tends to be more intense when the death occurred unexpectedly as a result of an acute illness or injury. In such cases, the bereavement overload and consequent depression may be so great that the bereaved person attempts to commit suicide. Suicide as a result of postbereavement depression is a particularly serious risk for older men who have lost a spouse (Stroebe & Stroebe, 1987). A bereaved person may also die from natural causes, such as a heart attack precipitated by the loss. The results of several research studies (Clayton et al., 1971; Helsing, Szklo, & Comstock, 1981; Parkes, Benjamin, & Fitzgerald, 1969) indicate that the death rate for bereaved persons during a year or so after the loss is significantly higher than that for nonbereaved persons of comparable age. The death of a spouse, for example, is associated with lower activity of the immune system and an increased risk of various physical and psychological disorders (Bradsher, Longino, Jackson, & Zimmerman, 1992).

A proposed explanation for the higher mortality rate of bereaved persons is the desolation effects hypothesis. According to this hypothesis, the event of widowhood and the circumstances surrounding it have deleterious, debilitating effects on the bereaved person. These effects consist of grief, feelings of hopelessness, new worries and responsibilities, and changes in diet, work routine, and financial situation (Epstein, Weitz, Roback, & McKee, 1975). Other explanations for the higher mortality rate of bereaved persons have been proposed (see Epstein et al., 1975), but none is quite as convincing as the desolation effects hypothesis.

Surefire Ways To Put Your Self Improvement On The Fast Track. This Book Is One Of The Most Valuable Resources In The World When It Comes To Accelerated Learning Techniques For People New To Personal Development.