Panthenol (Fig. 3) is the biologically active alcohol analogue of pantothenic acid, a vitamin of the B-complex group, which is a normal constituent of skin and hair. Pantothenic acid, also called Vitamin B5, carries out its function in the body as an element of co-enzyme A, a molecule composed of cysteamine, ATP, and pantothenic acid. This substance is present in all living cells and serves a vital role in the metabolism of a variety of enzyme-catalyzed reactions by which energy is released from carbohydrates, fats, and proteins. Skin manifestations of pantothenic acid deficiency are well known, and include cornifica-tion, depigmentation, and desquamation.

Pantothenic acid is an unstable substance. In topical preparations such as skincare, haircare, nailcare, and derma products, pantothenic acid is used in the alcohol form, called panthenol. Its use is based on its dual role as a vitamin precursor and as an ingredient with ideal cosmetic properties. When topically applied, panthenol is absorbed by the skin and can be bioconverted into pantothenic acid [31]. As such it exerts all functions of vitamin B5.

Because it has a distinct humectant character, panthenol acts as a skin moisturizer [32,33]. This hygroscopic substance not only provides water to the skin surface but it also penetrates deep into the epidermis and brings water to, and retains water in, the inside of the skin. Panthenol imparts a smooth, light feel to the skin without any greasiness or stickiness. Because it is well tolerated by the skin, it is an ideal and widely used ingredient in baby care products as well as in products for sensitive skin.

Topically applied panthenol stimulates epithelization as was shown by Weiser and Erlemann [12]. Superficial wounds treated with creams containing 5% panthenol reduced the healing time by 30% compared with placebo. Favorable effects were also reported in many kinds of skin disorders accompanied by inflammatory reactions such as burns [34], nipple fissures [35], eczemas [36,37], and many others. Another application field of pan-thenol is, therefore, derma products for wound healing and for soothing of inflammatory disorders where it is usually incorporated in concentrations of 5%. The concentrations in cosmetics vary mainly from 0.3 to 2%.

The use of panthenol in haircare products goes back to the early 1960s, when inflammatory reactions on the scalp were treated with panthenol-containing creams. Pan-thenol not only showed a soothing effect but also had beneficial effects on the hair.

Pantothenic acid is a natural constituent of human hair [38]. Stuettgen applied tritium-labeled panthenol intracutaneously by injection and could show a transport of radioactive material into the hair [39]. Stangl observed a significant increase of pantothenic acid concentration in the hair after topical application of panthenol over longer periods [38].

Panthenol acts as a humectant for hair. It builds up a thin moisture film on the surface of the hair and gives hair shine without making it greasy. Panthenol also penetrates into the hair cuticle and brings moisture to the cortex. This imparts good pliability and manageability properties to the hair, and improves its resistance to mechanical stress such as combing, brushing, and heat blowdrying.

Panthenol can also contribute to give hair more body. A thickening of the hair after 2 minutes exposure to a 2% water solution of panthenol was shown by means of scanning electron microscopy [39].

The main commercial forms are d-panthenol, dl-panthenol, and ethyl panthenol. All these forms are soluble in e.g., water, ethanol, and propylene glycol, but insoluble in fats and oils. Ethyl panthenol is an ether and available either as d-form or a racemic mixture e of d- and l-form. Biological activity has only the d-form, because only d-pantothenic acid m is incorporated into coenzyme A.

Vitamin C (Fig. 4) is certainly the best-known vitamin. Known also as ascorbic acid, it g is a potent antioxidant, a scavenger of superoxide and peroxyl radicals, which are involved in lipid peroxidation in tissues such as the human skin. 2

Like vitamin E, vitamin C belongs to the natural nonenzymatic antioxidant defense system. Different from the lipophilic properties of tocopherol, ascorbic acid is water-soluble and acts in the more hydrophilic environment of the skin structure.

There is a wealth of literature available on functions of vitamin C in the human organism [41]. Of special interest for the cosmetic industry are those publications dealing with strengthening of the antioxidant system, stimulation of collagen formation, skin lightening, and treatment of hyperpigmentation. Vitamin C has also proven to have good wound-healing properties.

Darr et al. [42] investigated the antioxidant properties of vitamin C in porcine skin. Topical application of ascorbic acid not only resulted in a significant elevation of cutaneous levels of this vitamin but also protected the skin from UVB damage as measured by erythema and sunburn cell formation. In addition, they could show that UVB irradiation reduces the vitamin C levels in the skin. Similar reductions were reported by Podda [9] and to a lesser extent by Fuchs [10].

There are two possibilities of how vitamin C can participate in the inhibition of UV damage when applied to the skin: either it directly reacts with, or quenches, certain free radicals, or it helps to regenerate tocopheryl radicals formed in the course of lipid peroxidation prevention. Vitamin C is, therefore, an attractive molecule for use in skin cosmetics, particularly in combination with vitamin E.

Dermatologists have long observed that skin fibroblasts synthesize less collagen as they age and that too much sun increases the decline. Vitamin C could counteract this decline in two ways. Ascorbic acid is an essential cofactor in the hydroxylation of proline and lysine to form hydroxyproline and hydroxylysine, amino acids of importance to the function of collagen [43]. In addition, vitamin C stimulates the formation of collagen [43]. Thus vitamin C contributes to the formation of a strong matrix of the dermis and can be used in cosmetic products for the maintenance of healthy skin.

Ascorbic acid and its esters are also used as active ingredients in skin bleaching or skin lightening cosmetic products. This use is supported by publications such as that by Takashima et al. [44]. These investigators reported successful skin lightening in patients with chloasma which were treated with an ointment containing 3% magnesium ascorbyl phosphate.

There are mainly two possibilities how ascorbic acid can influence melanin to achieve a lightening of skin color: partial inhibition of formation of new melanin or modification of melanin already present, e.g., by promoting the conversion of formed melanin to the reduced form. Both mechanisms have been investigated and discussed for ascorbic acid [44,45]. Further studies are needed to clarify the exact mode of activity.

the skin. Its use, however, has been limited to date due to the insufficient stability of ascorbic acid in aqueous solutions and the prices of some of the more stable derivatives. Get All The Support And Guidance You Need To Be A Success At Having Better Skin. This Book Is One Of The Most Valuable Resources In The World When It Comes To Important Info On Dealing With Skin Disease. 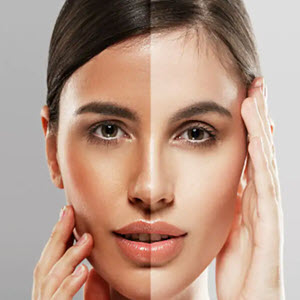 How to Whiten Your Skin Naturally